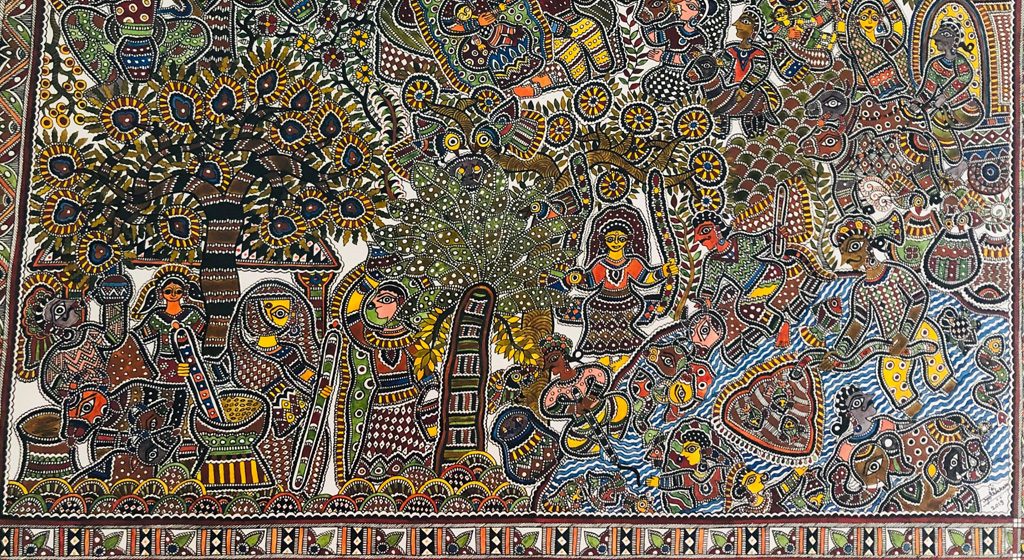 By Meghana Giridhar, Founder of Let's Curate On July 1, 2019

I have never been one to gush over art and wax poetic about techniques and the allure behind a brushstroke. But a chance encounter with a painting at a busy airport in India made an unforgettable impact on me. Mumbai airport always thrills me and as I was wrestling with mixed emotions at the end of my annual trip to India last August, I felt myself drawn to a beautiful store displaying art from various parts of the country.

One in particular caught my eye, so much so that I ended up chatting with the personable manager of the store at length about it. In the last few minutes, my mind was abuzz with possibilities and I nervously asked if I could commission a custom piece for my house. What caused me to blurt out that question is beyond me but something did compel me and thus began my journey to unraveling the magic of a Madhubani.

Madhubani art from Bihar can be traced back to 2,500 years ago. Madhubani literally means the ‘forest of honey’. This tribal art form was originally done on walls coated with mud and cow dung especially in the wedding chambers of newlyweds. It’s believed that this art form originated during the times of Ramayana when Raja Janak (father of Sita) called artists to capture the wedding of Lord Rama and Sita in the form of Madhubani painting.

These paintings depict an assembly of symbolic images of the lotus plant, the bamboo grove, fishes, birds and snakes in union. To maintain the creativity and precision, Madhubani paintings are made from the powdered rice paste using fingers, pen nibs, matchsticks and twigs with natural dyes. These images represent fertility and proliferation of life. There are five different styles of Madhubani Paintings such as Bharni, Katchni, Tantrik, Godna and Kohbar.

The theme I chose for my custom piece was “village life in India”. The store coordinating the process informed me that the artist could work with the theme but could not share a draft. Mind you, I had never heard of the artist, had no information about her background and didn’t have any reference point except for the one painting in the store at Mumbai airport. But yet, I felt the need to move on and submit to all the unknowns. 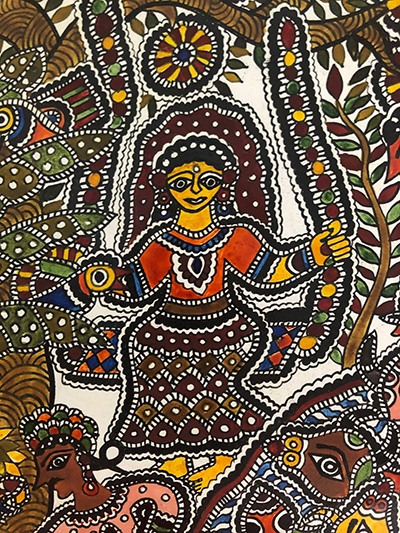 Over the next several months, I received photographs of the artist at work. It began with what seemed to be like a child’s interpretation of my theme. As time passed, I saw my vision coming alive in bits and pieces but it was only when the artist started filling it in with color, when it came to life. I grew impatient but somehow knew this was a process that could not be rushed. And exactly 9 months after I began my conversation, I received a package at my apartment in New York.

It took me a while to open the rolled up parchment, not because it was tightly assembled but because with every layer, I felt the anticipation building. I was seized simultaneously by feelings of dread and excitement. Would it be a huge disappointment, this painting that a novice like me had grandly and maybe foolishly commissioned? Had the artist understood what I wanted?

As the final layer slipped off, I rolled it open, with trembling hands. And there it was, in its full glory! I didn’t know where to look. My eyes drank in the wonders and darted from corner to corner, taking in all that the artist beautifully encapsulated and brought to life. My Madhubani was home and my heart soared with gratitude for this piece of art that brings me such joy every single day. 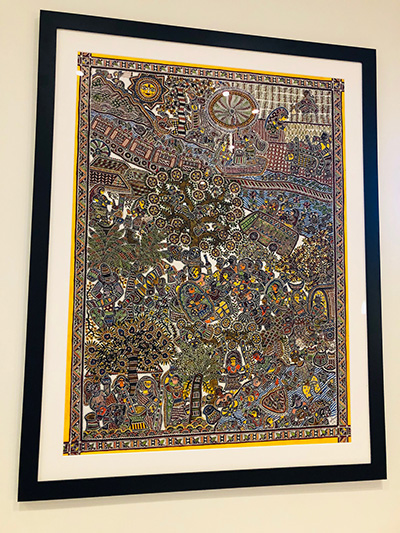 I am proud to announce that the artist, Jyoti Lal Karn is now featured on Let’s Curate under Global Art in Best of Asia. Please click here to read more about her work.